In enzymatic catalysis, a substrate combines with an enzyme to form an activated complex, which can decay to give a catalytic product

The Michaelis-Menten equation gives the rate of forward reaction

The effect of substrate concentration mA on the rate predicted by this equation follows a characteristic pattern, as can be seen from the figure below.

The Michaelis-Menten equation behaves very much like the Langmuir and Monod equations, described in the Surface Complexation and Microbial Populations sections, respectively.

In geochemical modeling, we prefer rate laws giving the net rather than the forward reaction rate. Accounting for the reverse reaction,

the net rate proceeds at the rate of the forward less the reverse reaction. It is given by

where mP is product concentration, KP = (k2 + k3)/k4 is the half-saturation constant for the reverse reaction, and Q and K are the reaction's activity product and equilibrium constant, respectively.

We consider here the fate and transport in aerobic groundwater of the ring compound benzene, C6H6. Benzene is a suspected carcinogen with an MCL (Maximum Contamination Level) set by the US Environmental Protection Agency of 5 µg kg−1.

Benzene is perhaps the most commonly remediated groundwater contaminant because it makes up much of the volatile fraction of petroleum fuels. Contamination of this sort is commonly called BTX, after the most soluble compounds—benzene, toluene, xylene—that make up gasoline. There are approximately 100,000 sites in the US known to be contaminated with BTX.

Dissolved in groundwater, benzene is gradually degraded by a variety of microorganisms present naturally in the subsurface. The natural attenuation is most rapid under aerobic conditions.

To compute a model of aerobic biodegradation in flowing groundwater, double-click on file “Benzene.x1t”. Program X1t, the one-dimensional reactive transport model in the GWB, opens.

Click on File → View → “.\thermo+benzene.tdat”. This dataset is the “thermo.tdat” compilation installed with the software, with an added entry for benzene (learn how to edit the thermo dataset yourself). Look for "Benzene(aq)" to find the reaction

Considering the log K at 25°C of 537.5, should we expect benzene oxidation to be a favored reaction under aerobic conditions? 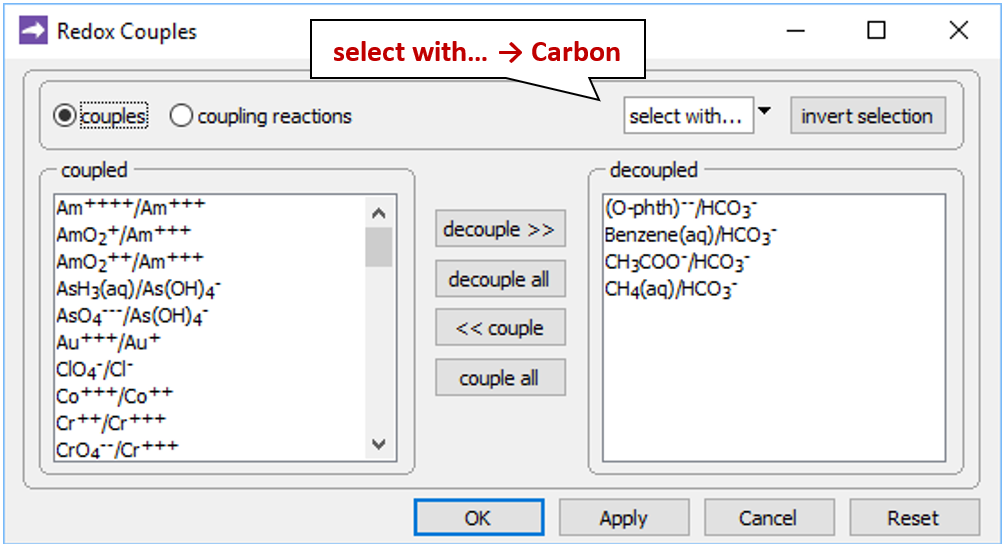 and note that the reactions between carbonate and the organic forms of carbon have been disabled. Carbon in the simulation can therefore change redox state only by kinetic reaction.

Look at the Initial pane 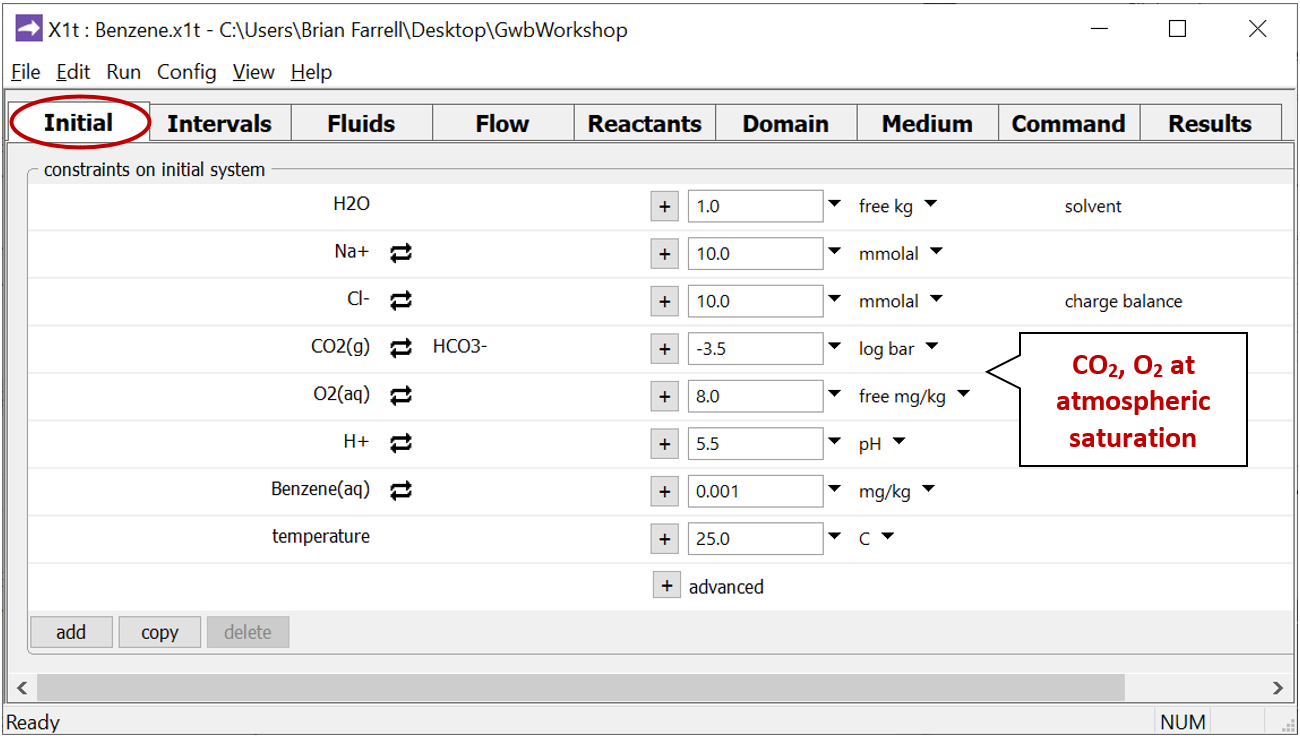 to see the composition of water in the aquifer at the start of the simulation.

The Fluids pane shows the two waters that will pass into the domain. The “contaminated” fluid 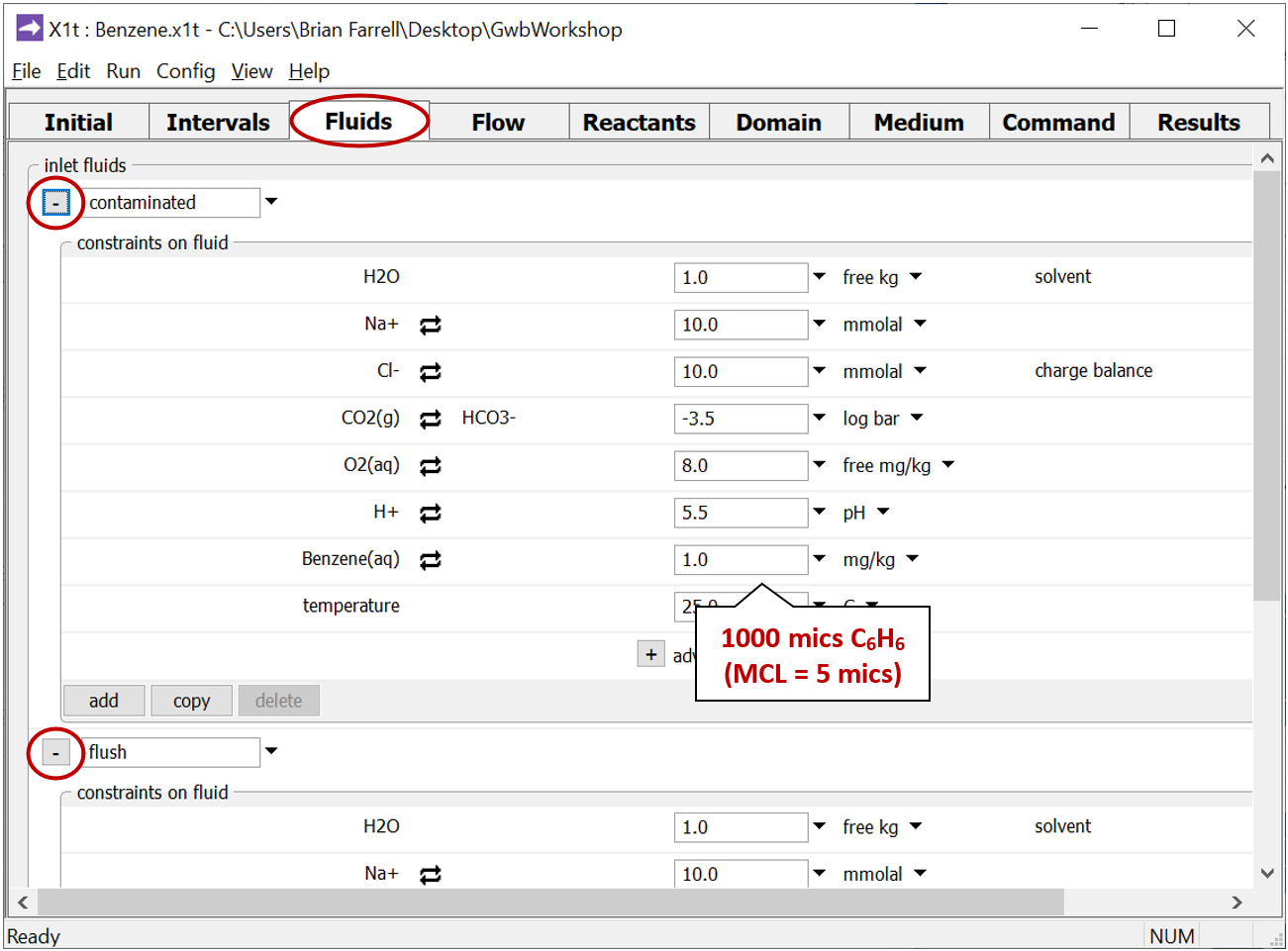 contains 1000 µg kg−1 benzene, while the “flush” fluid holds the clean water that later flushes the aquifer, after it's been contaminated. 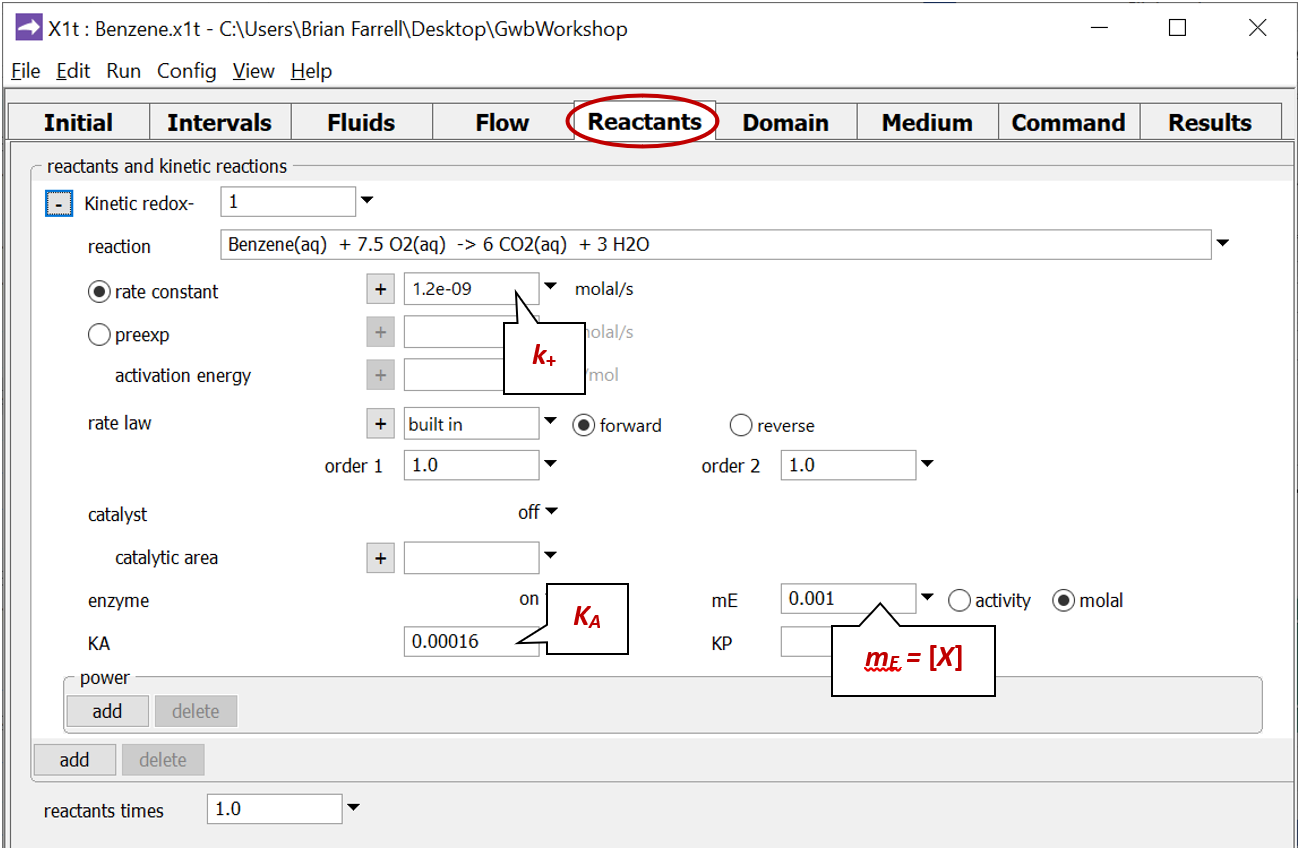 and specifies values for the parameters in the corresponding rate law. If the kinetic reaction hadn't already been created, you would click on

→ Kinetic → Redox reaction to do so.

Note on Config → Output… a suffix “_benzene” has been applied

To compute the non-reacting case, return to the Reactants pane 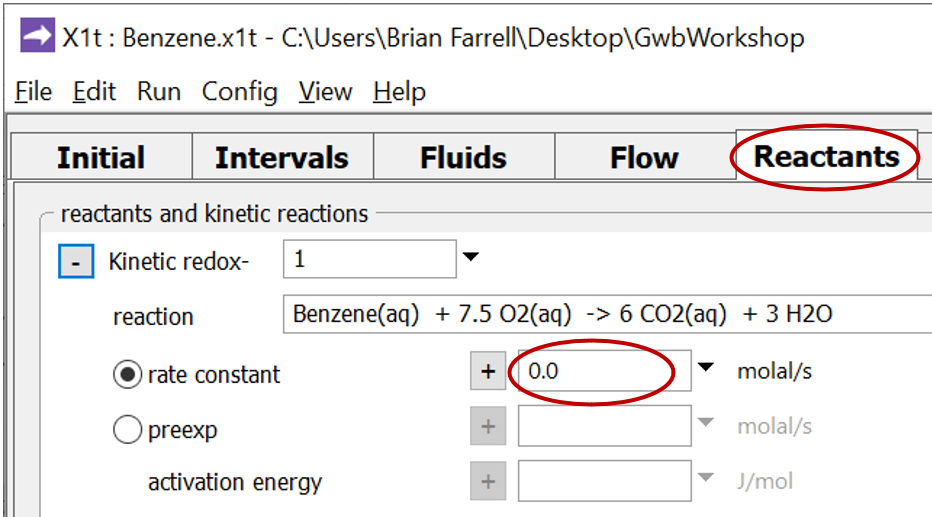 and set the kinetic rate constant k+ to 0. The null entry disables the reaction. Set a different suffix

and rerun the model.

The plot below shows the results of the non-reacting and biodegrading cases together. The non-reacting case, in blue, is much like the example from the Mass Transport section. The pulse of benzene migrates at the rate of groundwater flow, traversing the aquifer in 10 years 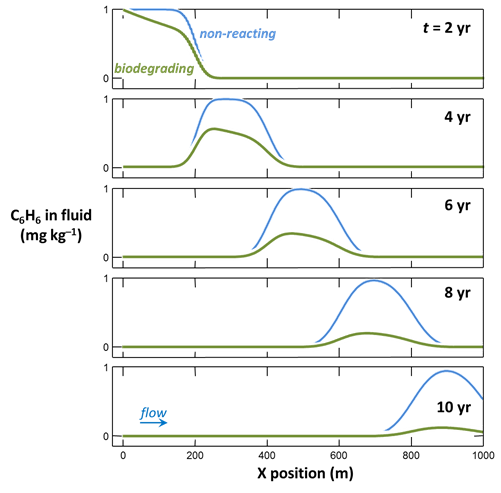 Where benzene can degrade, the concentration attenuates as the pulse travels through the domain. The pulse is asymmetrical because the benzene at the leading edge has been in the domain longer, and hence has been degrading for a longer period of time.

In aquifers containing significant amounts of natural organic matter, benzene sorbs to the surfaces of the organic particles, retarding its migration. The amount of retardation varies with organic content.

To model in X1t how sorption might affect benzene biodegradation, restore the rate constant for benzene bio-oxidation 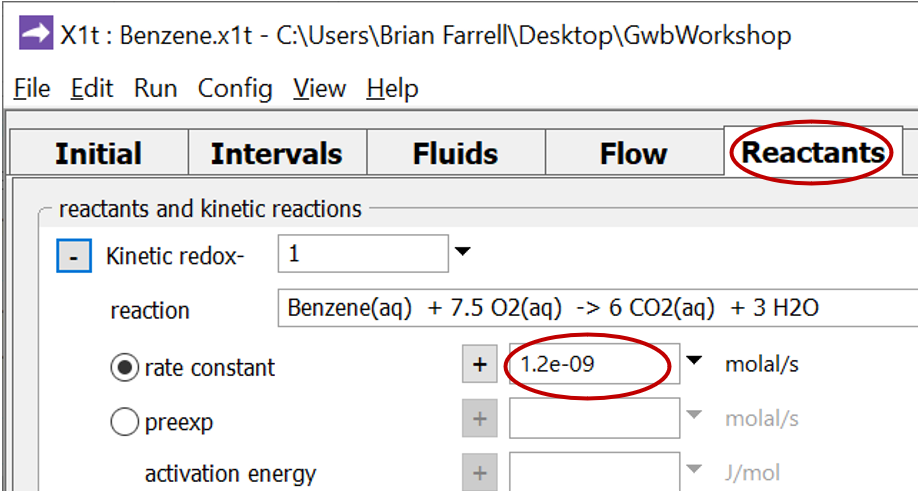 if necessary, and read in (or drag into the window) the surface dataset “Benzene_Kd.sdat”

The dataset specifies a distribution coefficient Kd' of .16 × 10−3 (mol C6H6) (g sediment)−1. This value corresponds to a retardation factor RF of 2, which might be observed in an aquifer containing about 1 wt% organic matter.

and rerun the simulation.

How does sorption affect the mobility of benzene contamination, compared to the non-sorbing case? In which case does benzene biodegrade most rapidly? Why?

The plot below shows the sorbing and biodegrading case, in orange, together with our previous results 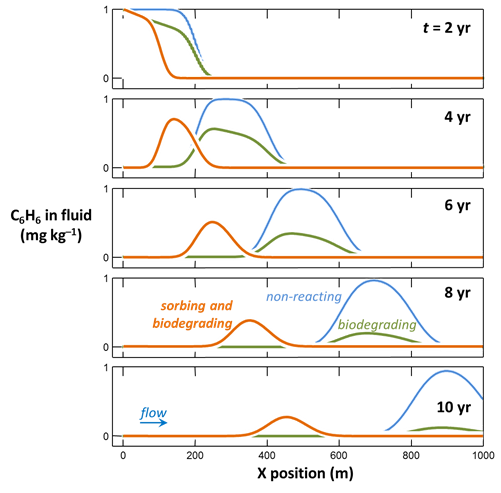 The benzene passes more slowly through the aquifer, moving at only half the speed of the groundwater flow, reflecting sorption and retardation. Less benzene degrades by biological activity than in the non-sorbing case, since at any given time only a fraction of the contaminant is available to the microbial consortium in aqueous form.

This clip follows a plume of benzene contamination as it moves through a heterogeneous aquifer and is degraded by the microbial community there. The simulations show:

Move on to the next topic, Dissolution and Precipitation, or return to the GWB Online Academy home.