The user supplies parameters for the rate law, including a specific surface area and rate constant for each mineral. The rate constant can be set directly or it can be calculated from the activation energy EA and pre-exponential factor A using the Arrhenius equation

where R is the gas constant, and TK is absolute temperature.

How rapidly does mineral dissolution affect the chemistry of water flowing along an aquifer composed of only quartz? Double-click on “Quartz.x1t” to calculate a reactive transport model of rainwater infiltrating such an aquifer.

shows the conditions at the onset of the simulation.

On the Intervals pane

we set the model's time span and associate an inlet fluid with the domain's left side.

On the Fluids pane

we define a fluid called “inlet”, the rainwater recharging the aquifer, which is set to be undersaturated with respect to quartz.

On the Reactants pane a kinetic law governs quartz dissolution 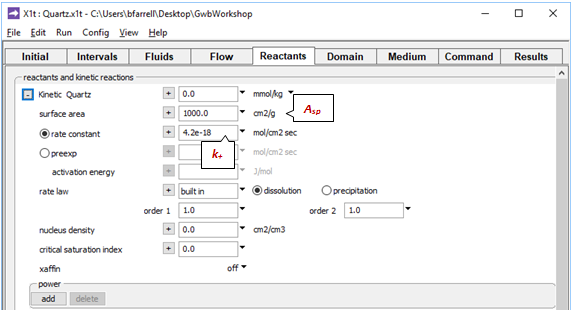 The rate constant k+ is from Rimstidt and Barnes (1980), and the specific surface area Asp is from Leamnson et al. (1969). The mass of quartz carried in the simulation is the amount of buffering mineral shown in the Initial pane, plus the mass set in the Reactants pane, which here is 0. 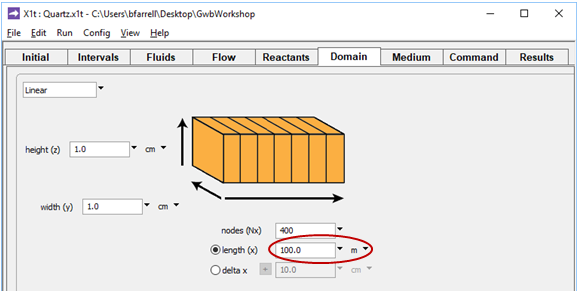 and on the Flow pane

and select Run → Go to calculate the model.

and graph the concentration in mg kg−1 of SiO2(aq) in the fluid against position in the aquifer. Choose the time step at the end of the simulation, t = 30 years.

once again to open a second instance of Xtplot. Plot along the aquifer the dissolution rate (on Y Axis pane, set “Variable type” to “Reactant properties”, then choose “Dissolution rate, Quartz”) in volume percent of the aquifer per year, again at t = 30 yr. 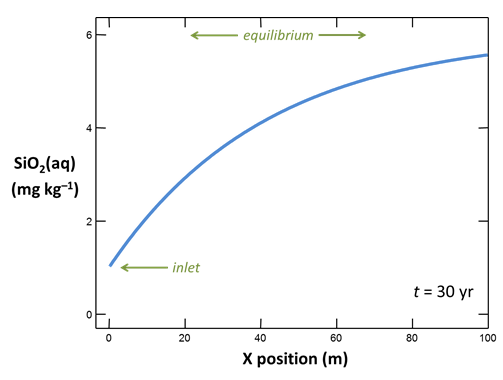 In the first few meters, the fluid has not yet dissolved much quartz, so the concentration is similar to that of the recharging fluid. The concentration increases with distance, approaching the equilibrium value (quartz solubility) 100 m from the recharge point.

Plotting dissolution rate against position, it is evident that reaction is most rapid near the recharge point and decreases along the direction of flow as dissolved silica accumulates in the groundwater 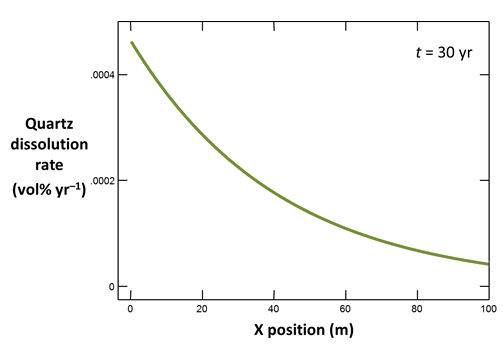 In the figure below, the dissolution rate is plotted against time at a location 5 m from the recharge point. As rainwater enters the aquifer and reaction begins at that point, the dissolution rate, initially 0, quickly adjusts to an almost constant value, as does silica concentration 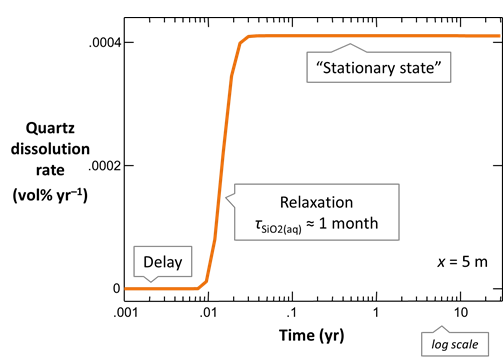 The simulation end result is not a steady state, strictly speaking, because quartz is gradually dissolving, decreasing its surface area and causing the dissolution rate to diminish slowly with time.

Leaving the two instances of Xtplot alive, return to X1t and increase the time span

Rerun the simulation. When the calculation finishes, the graphs you made in Xtplot will update themselves automatically. How has the distribution of the silica dissolution reaction changed in the aquifer?

Finally, repeat the calculation assuming a time span of 1 year, which corresponds to vx = 10, 000 m yr−1. How have your plots changed?

The figure below shows results calculated for velocities spanning the range considered. The simulations correspond to Damköhler numbers Da much less than 1 for rapid flow, to much greater than 1 when flow is slow 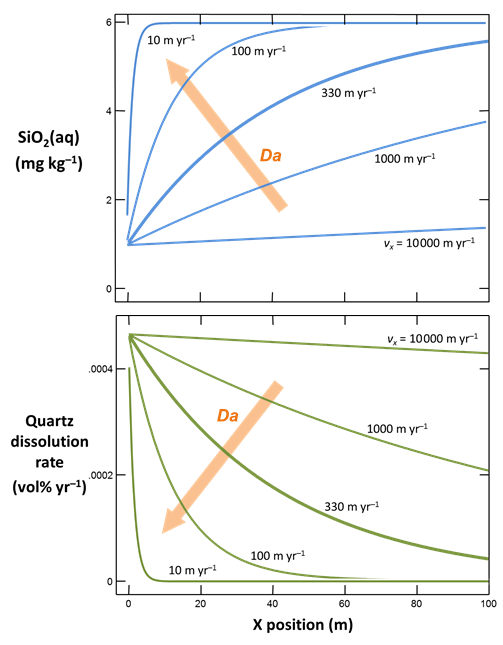 At low Da, transport overwhelms reaction and the fluid across the domain remains fully undersaturated with respect to quartz. Since quartz saturation changes little with position, the dissolution rate remains nearly constant. At high Da, in contrast, reaction controls transport and the infiltrating rainwater reacts toward equilibrium before migrating far from the inlet. In this case, the reaction rate is nearly 0 across most of the domain.

Only for the intermediate cases does silica concentration and reaction rate vary greatly across the main part of the domain. Significantly, only these cases benefit from the extra effort of calculating a reactive transport model.

For more rapid flows, the same result is given by a lumped parameter simulation, or box model, as we could construct in React. And for slower flow, a local equilibrium model suffices.

In an application of mineral dissolution and precipitation kinetics, hot water is injected into a petroleum reservoir in order to stimulate production. The steam flood reacts with kaolinite, calcite, and quartz in the formation to produce swelling clay (beidellite) and CO2.

The animations in the clip show variation over the course of the flood in:

Comfortable with mineral dissolution and precipitation?

Move on to the next topic, Microbial Populations, or return to the GWB Online Academy home.