Various industries around the world that generate large volumes of liquid byproducts dispose of their waste by injecting it into the subsurface. Because of environmental concerns and the potential difficulties posed by losing permeability and formation caving, well operators seek to avoid deterioration of the formation accepting the wastes or the formation's confining layers. Wastes are commonly far from chemical equilibrium with the minerals in the formation when they are injected and, as such, can be expected to react extensively with it (Boulding, 1990).

First, we consider injection of caustic waters into Devonian dolomites at a depth of about 2600 feet. About 6 million gallons of waste were injected monthly into two wells.

At the time of drilling, analysis of formation samples indicated that the injection zone was composed of nearly pure dolomite, CaMg(CO3)2. The carbonate formation was thought to be safe for accepting an alkaline wastewater because carbonates are considered stable at high pH.

With time, however, well operators encountered a number of problems, including formation caving and loss of porosity and permeability in zones that had been accepting fluid.

Double-click on file “dolomite.rea” and when React opens, look at the Basis pane 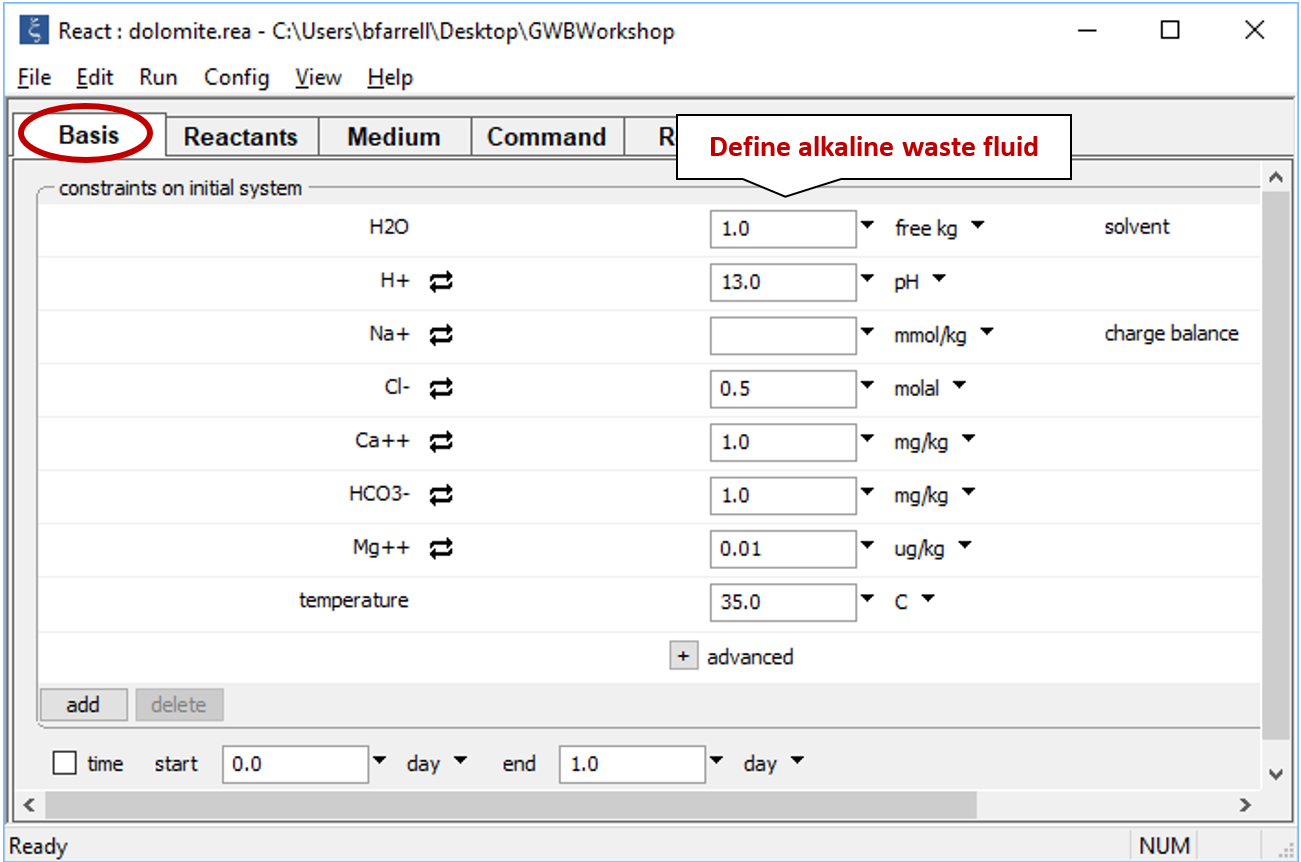 which contains the composition of the alkaline waste.

The input sets up the irreversible reaction of dolomite into the NaOH-NaCl waste.

Plot the minerals that, according to the calculation, form as dolomite dissolves. Also plot how dolomite dissolution affects the solution pH and species distribution. Write the overall reaction predicted.

The calculation results, shown below, predict that dolomite dissolves into the caustic fluid, from which calcite and brucite precipitate. This continues until the fluid's pH decreases to just below 12, at which point the dolomite becomes saturated and ceases to dissolve into the waste fluid 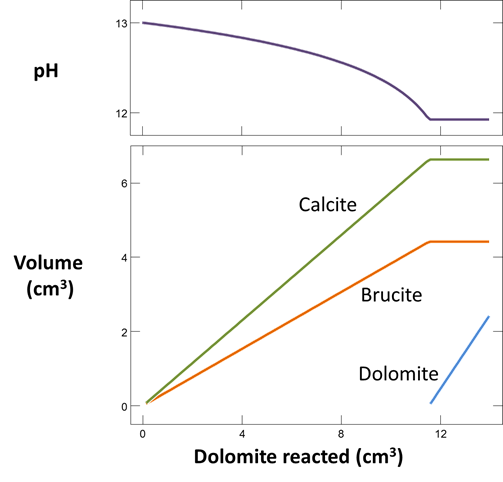 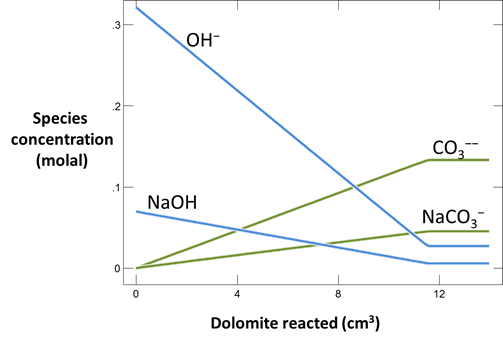 Grouping similar species together and accounting for the minerals involved, we can determine the overall reaction occurring in the system:

Dolomite reacts with hydroxyl in the fluid to produce calcite, brucite, and carbonate.

In June, 1987, a number of sidewall cores were taken from the formation (Mehnert et al., 1990). XRD analysis showed that significant amounts of calcite (CaCO3) and brucite (Mg(OH)2), as well as some amorphous material, had formed from the original dolomite. In some cases, the dolomite was completely consumed and the rock found to be composed entirely of a mixture of calcite and brucite. Do these observations agree with your calculation?

Yes, our calculations agree with observations from the wells. Interestingly, the fluid reaches equilibrium with dolomite after about 11.6 cm3 of dolomite have dissolved per kg water, but only about 11 cm3 of calcite and brucite form during the reaction. Since calculation predicts a net decrease in mineral volume, damage to the formation is evidently not due to loss of porosity. Instead, the reaction products likely formed a fine-grained, poorly coherent material capable of clogging pore openings and slumping into the wellbore.

Suppose that before it was injected, the waste was left in a lagoon long enough to equilibrate with CO2 in the atmosphere. Would the waste remain corrosive to dolomite?

Starting with the previous run, we'll remove the simple reactant dolomite from the Reactants pane, and instead specify a reaction path in which CO2 fugacity is increased to its value in the atmosphere, as shown below.

Select the “React 40 g of Dolomite” entry and click

, change the unit to “log fugacity”, and set a value of “−3.5”, the partial pressure of CO2 in the atmosphere

What is the effect of equilibrating the waste with CO2 in the atmosphere?

pH decreases to less than 10, as shown below 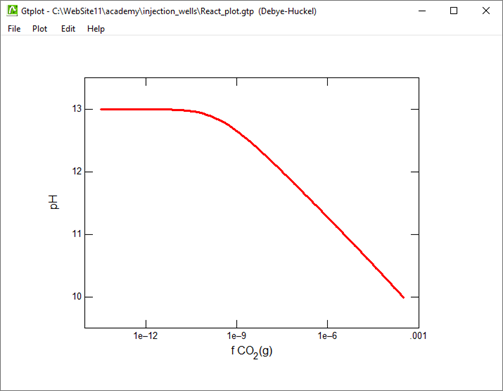 Now that the fluid has been equilibrated with atmospheric CO2, we'll see how it reacts with the dolomite formation. First, take the results of the path we just traced and use it as the starting point of a new run: Run → Pickup → System → Fluid. Move to the Basis pane to confirm the new starting fluid.

Move to the Reactants pane and once again set 40 grams of dolomite as a simple reactant, to be titrated into the equilibrated waste fluid. Choose

Set a suffix “_dolomite_equilibrated” on Config → Output... then click Run → Go to rerun the simulation.

Replot the results. How much dolomite dissolves in this case?

The waste, equilibrated with CO2 and with a pH less than 10, dissolves an insignificant amount of dolomite before reaching saturation. At that point, reaction ceases 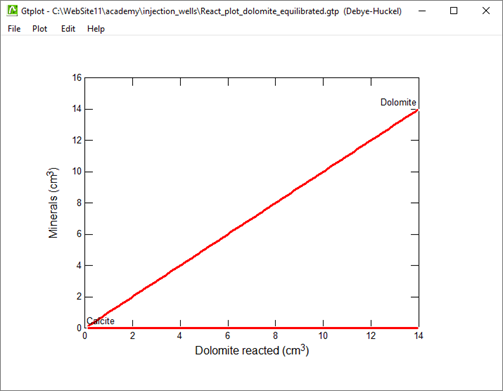 The experiment shows that the plant's waste stream could have been neutralized inexpensively by aeration.

Hydrochloric acid waste at Cabot Corporation near Tuscola, Illinois is injected into the Cambrian Eminence and Potosi formations, which are largely dolomites, at about 5,000 feet (Brower et al., 1989). In the 1980s, the well suffered a series of gas blowouts.

Blowouts appear to have occurred at times when especially acidic wastes were being injected. The acid apparently reacted with carbonate in the formations to produce a CO2 gas cap at high pressure. In some cases, the injected waste was more than 31 wt.% HCl. As a temporary measure, the plants are now limited by the Illinois Environmental Protection Agency (IEPA) to injecting wastes containing no more than 6 wt.% HCl.

Use React to investigate how HCl wastes would be expected to interact with dolomite in injection zones. The following table converts wt.% HCl to molality: 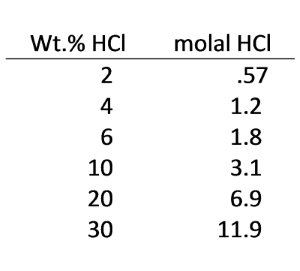 Double-click on file “blowout.rea” and move to the Basis pane 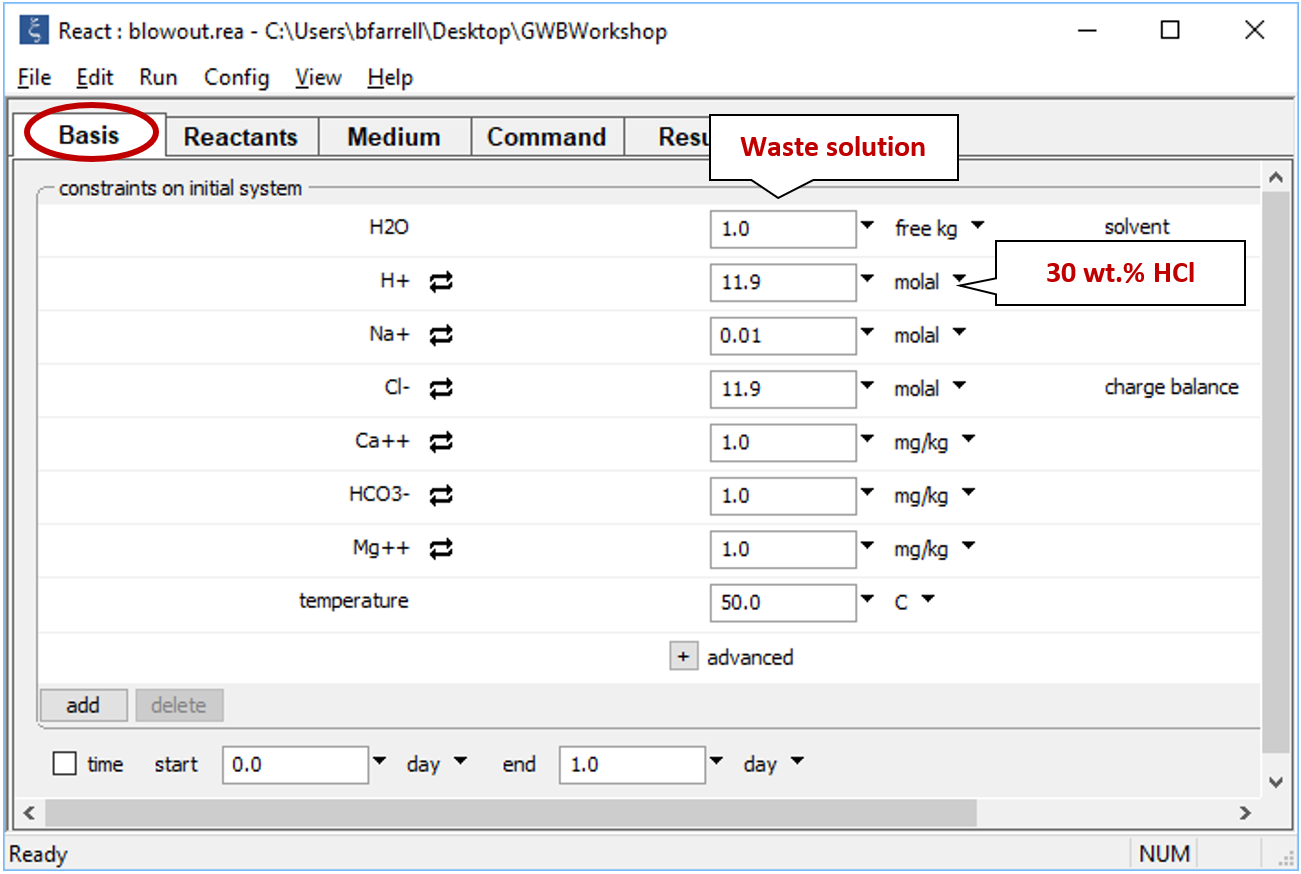 Here we've defined a reaction path in which we'll titrate 600 g of dolomite into the waste fluid.

What is the initial pH of the injected solution? Analyses of injected fluids report pH as <1 because the solutions are too acidic for available pH electrodes. Is this in agreement with your calculation?

The pH of the HCl waste is calculated to be −1, in agreement with the analysis.

Plot how pH and CO2 fugacity vary as dolomite reacts with the fluid. How much dolomite can be dissolved in a kg of a solution of this acidity? What is the overall reaction? 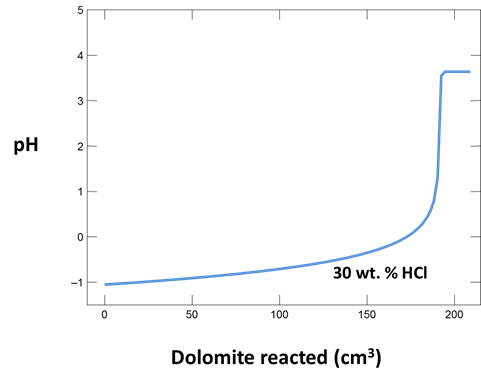 CO2 fugacity increases as the dolomite dissolves. It remains constant once the dolomite stops dissolving into the fluid 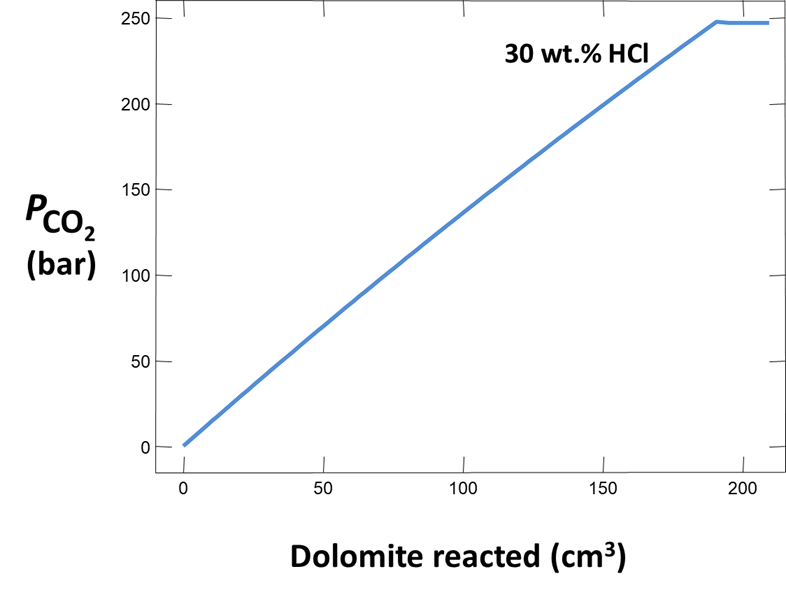 As shown in the plots above, reacting dolomite into the wastewater increases the pH and CO2 fugacity, according to the reaction

When CO2 fugacity exceeds the confining pressure in the formation, CO2 exsolves as a free gas

producing a gas cap in the subsurface.

Does the CO2 fugacity exceed the fluid pressure of about 150 bar at these depths? Could you have predicted the risk of blowing out a well by injecting such an acidic solution?

CO2 fugacity increases to almost 250 when the acidic waste reacts with the dolomite in the formation, exceeding the fluid pressure of 150 bars at the depth of the well. Under these conditions, we would certainly expect the possibility of a blowout.

We repeated the calculation assuming different strengths for the HCl waste being injected, as might occur if the waste was diluted prior to injection. Using the calculations from the table above, we changed the molal concentration of the H+ and Cl− components on the Basis pane. The example below shows how we set up a 2 wt.% HCl solution, equivalent to 0.57 molal HCl 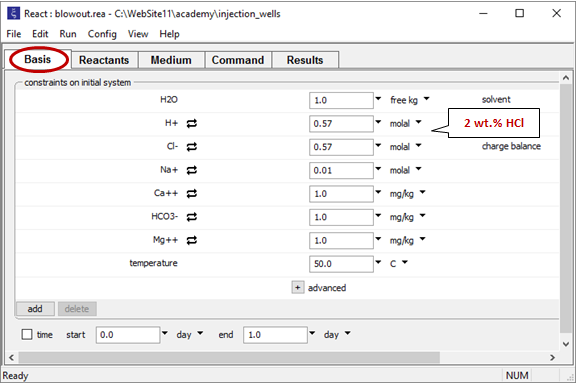 The various runs are plotted in orange together with the results of the original calculation, shown in blue 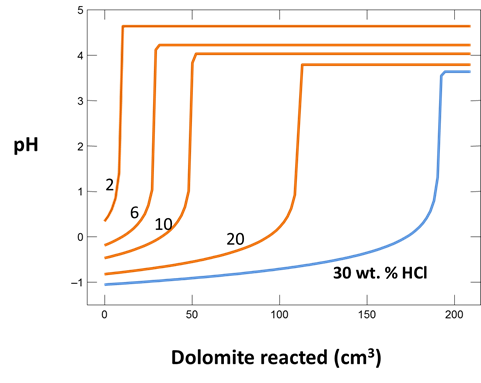 Compared to the highest strength acid, our models of the weaker acids have higher initial pH values and are able to dissolve less of the dolomite formation.

Because less of the carbonate formation dissolves upon injection of the weaker acids, the CO2 fugacity does not reach the same level as in the highest strength acid Judging from the figure above, simply diluting the strongest acid in an equal amount of water would be enough to prevent a CO2 blowout.

Move on to the next topic, Hydrothermal Fluids, or return to the GWB Online Academy home.