Multithreading is part of a free web series, ChemPlugin Modeling with Python, by Aqueous Solutions LLC.

Although Python is not set up well for multithreading applications, we'd like to discuss how client programs written in other langues, such as C++, can implement ChemPlugin objects to run in parallel.

To multithread a client on a conventional computer, a programmer likely works with the OpenMP application programmer interface (API). In our discussion here, we use OpenMP to multithread the “RTM1.cpp” client, the C++ equivalent of the Python script we discussed in the previous lesson.

The diagram below represents a multi-core processor 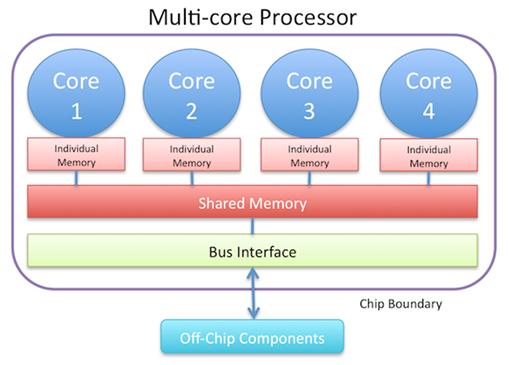 A multithreaded application runs threads of a process on more than one core. A hyperthreaded app runs two threads per core. The basic steps in multithreading a client program are shown below.

First, include the header file:

Note the hash (“#”) symbols in C++ are not for commented lines, as in Python. Rather, they indicate preprocessor commands. File “omp.h” is the C++ header for OpenMP.

Next, set the compiler option

The “-Qopenmp” keyword is required to produce a multithreaded executable.

Next, prepend to loops

The statements following the “#pragma” directive split creation of the ChemPlugin instances across a work-sharing loop.

Finally, set lots of instances! In general, creating a parallel region in a client program required the system to expend overhead. If there's too little work to share, the client may spend as much time administering the parallel region as it gains from the work sharing. As a result, it's best to set lots of instances to take good advantage of multithreading the client.

An example of a work-sharing loop is shown below:

Instantiation of a ChemPlugin instance involves a non-trivial amount of work. Each instance, upon being created, lays out memory for itself, reads in a thermodynamic dataset, and prepares itself to accept configuration commands. Significant improvement to the time required for an application to start up can be gained by multithreading the instantiation step.

is strictly serial; a single thread lays out one instance after another until “nx” isntances have been created.

One way to multithread the initialization is to cast “cp” as a vector of pointers to ChemPlugin instances, instead of a vector of the instances themselves. In this way, we can instantiate in parallel:

Here, the statements following the “#pragma” directive split creation of the ChemPlugin instances across a work-sharing loop.

Each vector element “cp[i]” is a pointer to a ChemPlugin instance now, rather than a reference to an instance itself. Hence, we need to change constructions like

A serial loop can be broken :

Work-sharing loops in OpenMP cannot be broken within the parallel region, however. To parallelize the loop, use a reduction variable “nerror” to count the number of times the loop encounters a condition that would cause it to break:

If “nerror” is non-zero after the loop completes, the client exits.

The loop over which client “RTM1.cpp” links the ChemPlugin instances

cannot work correctly as listed, because within the parallel region the various threads would write to and read from “link” simultaneously.

Instead, “link” must be re-declared within the scope of the loop

Inside the parallel region, now, “link” is private to each thread.

To test the extent to which multithreading the client program “RTM2.cpp” sped its execution relative to the single-threaded version of “RTM1.cpp”, we timed the solution of three problems using varying numbers “nx” of ChemPlugin instances. In each case, we report speedup as the clock time required to solve the problem using the single-threaded relative to the multithreaded client.

The speedups observed on a quad core processor for the multithreaded client on runs made using 4 000, 10 000, and 40 000 ChemPlugin instances are:

The nominal maximum speedup on a quad core processor is x4. It is possible, as we see in this table, to exceed this limit somewhat by hyperthreading—i.e, scheduling two threads on each core.

Return to the ChemPlugin Modeling with Python home.