Diffusion and Dispersion is part of a free web series, ChemPlugin Modeling with Python, by Aqueous Solutions LLC.

Dispersive (or diffusive) mass flux is the net rate chemical mass moves in response to a concentration gradient, as given by Fick's law

In this equation, Ji1 is the flux of chemical component i in mol s−1, A is the link's cross-sectional area in m2, D is the Fickian coefficient in m2 s−1, and Ci is the concentration of component i in mol m−3. The notation Ji1 reflects the first-order derivative in the transport law.

Here Cij and Cilinked are the concentrations of component i at the originating and linked instances, respectively.

For a homogeneous medium and uniform grid

In the general case, instances may vary in D and spacing Δx 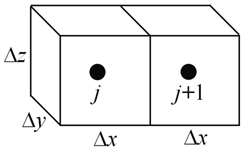 which works out to

for the heterogeneous, arbitrarily gridded case.

The unit field may be any unit of flow rate as set out in the Units Recognized appendix to the ChemPlugin User's Guide. If the client does not specify a second argument, the value is taken to be in m3 s−1.

When the “Transmissivity()” member function is called without an argument, it returns the transmissivity currently set for a link. The examples below

store the current transmissivity value across “link” in variable “trans”, in units of cm3 s−1 or the default m3 s−1.

As a demonstration of how a client program can use ChemPlugin to model diffusive transport, we construct here a one-dimensional model of diffusion within a porous medium. In our model, the domain is 100 cm long and contains a NaCl solution of concentration 1 mmol/kg where 0 < x < 50 cm, and 0.001 mmol/kg where 50 < x < 100 cm. At t = 0, the salt begins diffusing from left to right, toward large x. 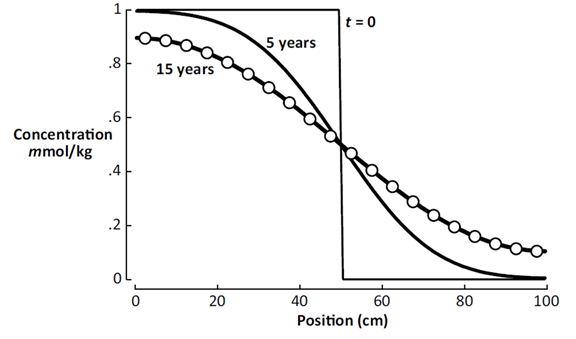 To get started, right-click on Diffusion1.py and open it in Notepad++.

The purpose of function “write_line()” is to write the simulation results to a file at specific points in time, instead of writing output after each time step, which would be unwieldy. The code is:

The simulation parameters are the numerical values that define the transport model.

Here, we note the length “deltax” of the instances is the domain size “length” divided by the number “nx” of ChemPlugin instances carried.

The transmissivity “trans” is the product of the cross-sectional area “deltay * deltaz”, the porosity, and the diffusion coefficient “diffcoef”, divided by “deltax”.

Variable “xstable” holds the stability factor Xstable, and “time_end” is the duration of the simulation. The value set for “delta_years” is the gap between the output events, and “next_output” is the time level at which the next event is to be triggered.

The next block of code opens an output stream to a disk file and writes a line identifying the position along x at which each ChemPlugin instance will be positioned.

Next, the client program sets out to create, configure, and initialize each ChemPlugin instance to make up the domain.

The first lines of the code set three character strings to hold ChemPlugin configuration commands: “cmd0”, “cmd1”, and “cmd2”. The former, “cmd0”, is to be applied to each of the instances, whereas “cmd1” pertains to instances on the left side of the domain, and “cmd2” to only the right-side instances.

The client next instantiates a vector of “nx” instances, but sets only the first to write console out messages, using the “banner” format to trace time stepping. If each of the instances had been set to produce console output, the result would be overwhelming and largely redundant. Finally, the client enters a loop in which it configures each ChemPlugin instance in the domain, and initializes it. If any of the instances does not initialize, the client exits with a non-zero status code.

The loop for linking the instances into a one-dimensional chain and setting transmissivity for each link is:

The loop starts by linking the second instance (index 1) to the first (index 0), then links the third to the second, and so on. For each link, the client sets the corresponding transmissivity, as previously stored in “trans”.

Note the best practice of linking an instance to the instance behind it, rather than in front of it. Flow across a link in ChemPlugin is positive when it moves toward the instance that originated the link, away from the linked instance. By the convention of linking backwards, then, flow is positive toward instances of increasing index.

The time marching loop begins each pass by querying the instances for the preferred time step, as determined honoring the stability considerations outlined above. Then, taking the minimum of the steps reported, it steps forward in time, advances the transport equations, and advances the chemical equations. Finally, it passes the results to “write_line()” and returns to make another step.

Running the client produces the following

on the console window

Once the run is complete, open the “Diffusion.txt” file that's generated by the client in a program such as MS Excel. 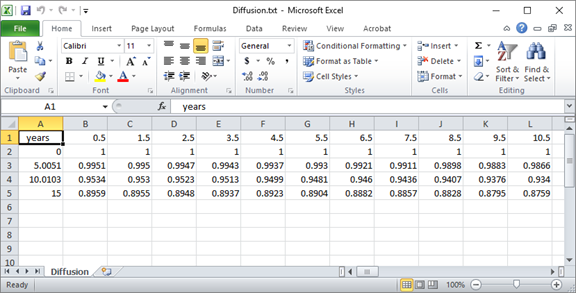 You can quickly plot the salinity profile across the domain at various points in the simulation. 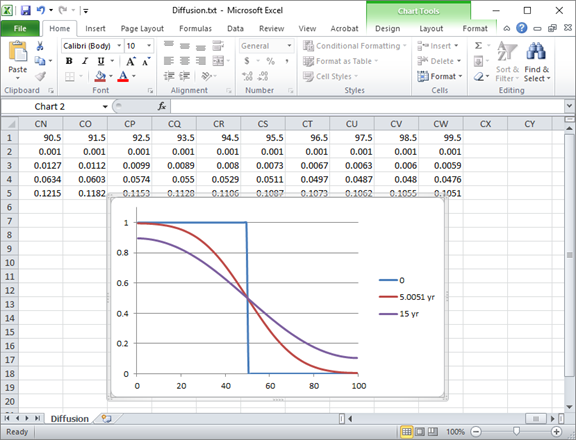 The plot below shows the calculation results after 5 years and 15 years.

The circles in the diagram correspond to the analytic solution to the diffusion equation at t = 15 years, from Carslaw and Jaeger's 1959 text, demonstrating correctness of the client's results.

Comfortable with Diffusion and Dispersion?

Move on to the next topic, Heat Transfer, or return to the ChemPlugin Modeling with Python home.